Today, we have the pleasure of sitting down with American artist, Eben Archer Kling.

Cooper: Originally from Connecticut, you currently reside in Amherst, Massachusetts. Where is home to you?

Kling: Home will always be New Haven CT for me. The pioneer valley is wonderful, but I need to be near water. On the other hand, at the risk of sounding dramatic home is wherever I can have a studio.

Your work involves painting and illustration, mostly watercolor and/or ink on paper. Would you mind elaborating on your interest in paper dolls, video, walls and printmaking?

My background is in illustration and printmaking. Painting is a relatively new thing for me. I only started to make large images with paint in the last three years or so. Everything before that was made crouching over a desk in my bedroom. When I had an opportunity to live in an apartment with ample studio space I began to work larger and painting seemed like a logical step for me to take. My interest in paper dolls, video, walls in public spaces etc. is not so specific. I really consider myself an “imagist” as it were. Particular medium choices are secondary to my compulsion to simply make images. I would like to think that the lexicon that I have developed over the years in my work is transferrable to multiple channels and that I can realize them in different forms. At this point in my practice it’s an exciting challenge to try and figure out what it would look like to turn a painting into a video and then back into a painting again. What would it look like to use a painting as a study for a sculpture and then form that back into a video? Did you go to art school?

I did, and currently am again. I attended Montserrat College of art in Beverly, MA and earned a BFA in Printmaking. Currently, I’m at UMASS Amherst working on a three year MFA program.

Would you describe your personality as methodical or spontaneous? How is this reflected in your work process?

I would say both. A large part of the process in which I compose imagery is careful. It’s thought about and labored over for quite awhile. There are many formal strategies that I carry with me still from my education as a designer and illustrator, however spontaneity is a large part of the composition as well. It’s not uncommon to spend time carefully articulating a narrative in the work and then, once it’s established spend almost as much time unmaking that narrative. Attempting to obscure the image in a way and inject some ambiguity to the situation. I would like for the work to be experientially disorienting. I would like for it to read like a daily utterance. Something that you see in a flash and by the time you double take it doesn’t look the way you thought it did. It should feel dizzy, like maybe you should not of had that last drink before you went home. Lets talk about your colors man. How do you get that control over the luminosity and the saturation of your hues?

Sometimes it’s hard for sure. Painting with house paint most of the time, luminosity is not really its strong point. It’s chalky and every color has white in it, very different than “artist pigments”. It takes a lot of treatment; sanding, scraping and washes to get it to behave the way I want. A lot of it is diversion tactics too. If you make an image with a bunch of muddy tones that are washed out and then drop a saturated color in a few places its likes staring at the sun. That’s painting though…

I’ve been making collaged images with frequency the past month or so and maintaining a certain amount of luminosity in those pictures is easier. If you want a garish saturated color to be present in an image you can just go down to the stationary store in your town and by a package of neon cardstock; it’s great. It looks like you have commissioned a fair amount of artwork that you have created using at least some digital componentry. But based on your studio work, you appear to lean towards the traditional purist, no?

I wouldn’t use the word purist. I try to keep an open mind about these things and not be too dogmatic in any sense when it comes technical choices in art making. Everything is an option and it’s all valid as far as I’m concerned. There are some digital components to the freelance work I have done for sure, but I’ve come to understand that as part of the medium. Consider even scanning an image and sending it to the interested party; that’s a digital component right there. It’s cleaned up, flattened on a screen and sent on its way to be printed; that’s already a few steps removed from the integrity of its origin. However you’re right in a sense, until recently I have been a “traditionalist” in the sense that I’ve been sort of opposed to including any digital components to the work that I produce in my studio. I just never thought it looked as good as paint. But even that however is beginning to crack as I go deeper into the work I’m making now. I’ve been producing material myself to collage and include in the images recently and it does have a very obvious digital to look to it. Living in a society where instagram Facebook, etc. are available twenty-four hours a day, when there is a constant influx of digitally made images everywhere and all the time, I think it’s important to engage that on some level. 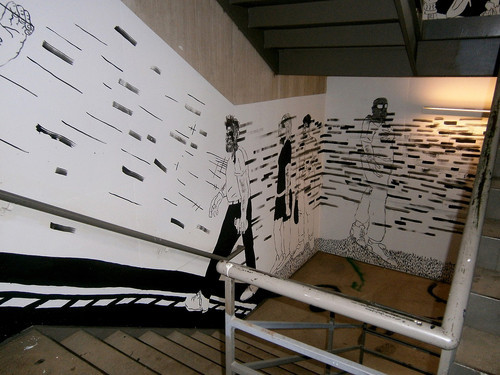 Criticism is a response to art. Do you take a pro-active role in addressing what is important to you in your work, as opposed to waiting for the tacit approval or denial from an ‘authority’? Are you currently under the influence of any ‘art reviews’ yourself?

I’m a cynical person. Criticism is a response to art, sure, but art is also a great way to channel criticism. I’m aware and will talk freely about what is important to me in my work, but I also prefer to not demand an implied meaning from a viewer or publics. I would never want to posture myself in front of these images and die on that hill. I think that projected meanings are one of most glorious things about art. It’s why it’s worth looking at. If I was going to make-work and tell you what its supposed to do I’d be better off writing a book. I would frame it in a way that you would either agree with or not. I need people to project their own meanings onto these images; it helps me to understand them more. I’m not making to just tell you something; I’m looking for empathy as well.

I’m not under the influence of “art reviews”, but enrolling in an MFA program where meeting and talking about work in progress constantly can provide its scrutiny’s. 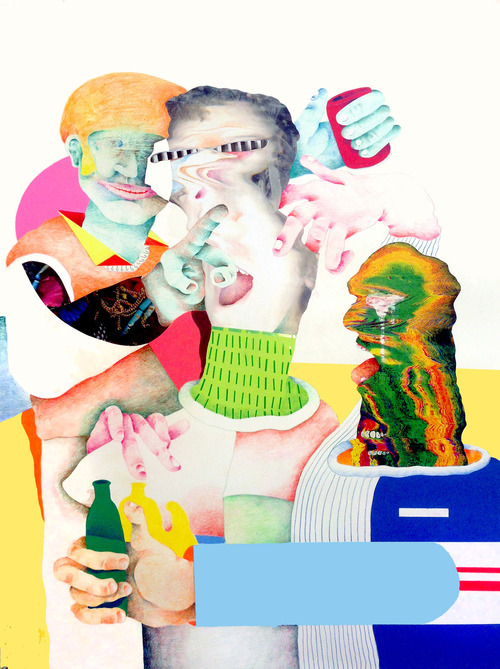 Your last show, Uninhibited Behavior takes an apathetic view on the destructions and distractions of city life. Are your subjects this confused and desperate, or is this playful propaganda?

I think the images are too unclear to be propaganda. I like that you went there though, that’s interesting…

It’s not exactly city life per se. I’m usually illustrating my surroundings to certain point and I don’t really live in the city. I think there is a good deal in there about apathy, consumption, negligence, mindlessness etc. Those paintings begin to critique modern American culture as I notice and experience it. Maybe in that sense it’s propaganda? On the other hand, sometimes the images are more ambiguous; they just get away from me and become a little too wild to be directly criticizing anything legible. At that point I suppose it just becomes a painting for paintings sake and I become more concerned with the formal elements of the thing itself than any kind of lucid narrative. 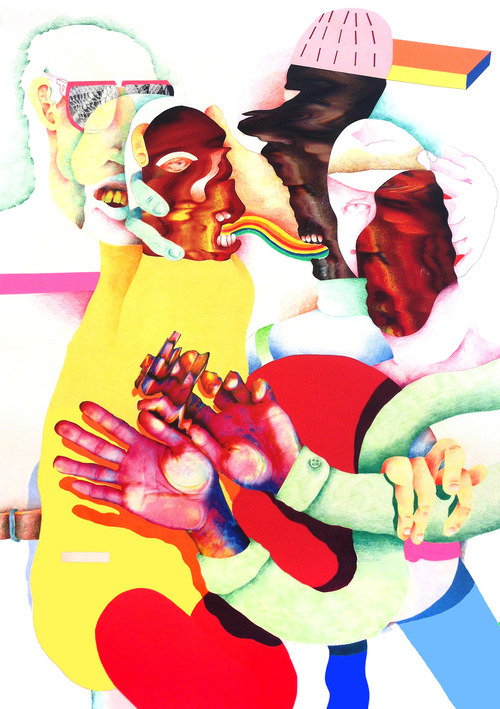 How has your work changed over the years? What makes it true?

I guess what makes it true is that I do it? I don’t really see how anything can be untrue. Even work that I don’t like is still “true” in a sense. Making art is absurd in the first place, a necessary absurdity I think, but trying to find truth in that absurdity is even more futile. I think good artists sort of lie a little bit about things and it’s ok. My work has changed over the years gradually. It’s always been small baby steps. Leaps and bounds from images to images don’t really happen in my practice. When things stop working I’ll wallow around in the muck and make a bunch of bad work for a while until something takes and I’ll ride that train until it becomes boring again.

Do you obsess over titling your work? How do you approach it?

No. I want my work to be open and speak for itself. When I title my work I want it to be like a cherry on top or something. It shouldn’t be necessary, but if you want to dig it could take you a little further into my process or concept. When did you decide to pursue art as a profession? What might you be doing if you weren’t making art?

Since I figured out that it could be. Still working in a kitchen.

I’d give it to my sweetheart to help pay off her student loans… Or selfishly buy this Sun City girls record, Torch Of The Mystics. They never repressed it and collectors have hiked up the price to about $300 now if you can believe it…

What is your relationship with music as it relates to art making?

That’s a hard one. I’ve done a few record covers and the artist had suggested that I listen to the album as a source of inspiration to create an image. No matter how good the record is it just never works for me that way. Consciously translating music into images doesn’t work for me. I listen to music constantly in the studio and I’m sure it informs the work but not in a way that’s easy to articulate.