It's my pleasure (more than I could have ever imagined) to sit-down with Portuguese artist, Rita Gomes aka "Wasted Rita".

Cooper: You grew-up in Águas Santas, Portugal and currently reside in Porto, but you seem anxious, how much longer will this be your home? Is there a place you’d rather be?

WR: Not at all. 2013 is being a unanxious life changing year. The only place I want to be is where I am right now, and there is now time I’d rather be than present. Traveling helped me open my eyes to the positive side of not so good things. Nowadays I’m aware that living in Portugal - besides the crisis, young unemployment, lack of opportunities and interest in culture - is a bless.

I’m also certain that Lisbon will be my new home and location as soon as I have time to stop in one city for more than one month in row. The world is too big to stop though. I’ll based in Lisbon, but I want to go everywhere. USA, Canada, Australia and Paris (again) are in the top of my sweetest desires. I know that you just returned from China, and have travelled abroad quite a bit as chronicled on your photo diary WASTED RITA GOES TO. How would you describe the life of an artist living and working in Portugal now that you have an outsider’s perspective?

The constant traveling helped me learn to appreciate the good things about my own country. The bad thing is all these good things about it are all the things that are not related to being an artist in Portugal. What I mean is: artists living and working in Portugal have 6% chances of make a live out of art or being financially independent. Illustration or art in general might be seen as a forever-teenage hobby for adults; and the bad thing is that most artists don’t respect their profession enough to feel able to say no to people who treat their work in such a disrespectful way. So, we are kind of trapped in a vicious circle.

I’m lucky (by lucky I mean I work hard and manage to make it through) enough to work mainly for magazines, projects or institutions outside of Portugal. Having my art spread all over the internet helped making my name recognizable in many countries around the world - even though that also leads to other kind of disrespect for one’s work when it comes to plagiarism and work appropriation.

But I guess this is not a portuguese problem, for what I’ve learned so far this year, it is spreading all over the countries. With the huge difference that in Portugal the chances of having financial support for any art related project are much lower than most countries I’ve visited in Europe.

You have to be an authentic passionate smart ass and never get tired of trying - then, working for other countries might help a lot. When I look at your work, I feel like I’m watching a story unfold, it feels very personal and sequential. Is this conscious? Who will play you in your movie

Not conscious at all and that’s probably why you find it so personal and sequential. It is a daily release of feelings - I like to call it a free psychiatric appointments with myself.

It had to be me playing myself. I wouldn’t let anyone else go so deep into my mental and emotional crap - even though I regularly share my work with an unhealthy amount of virtual people and I’m aware of how easy to relate it is.

You have found a seemingly massive audience for your art, is it punk to have so many people identify with what you are doing?

My work is not an attempt of coolness, it’s more me trying to deal with my own problems. If there are many people feeling what I do - cool; if there weren’t - cool anyway. I’d have to deal with it.

For me punk is doing what you love, the way you want, with your own values and not being trapped in others’ judgments or criticism (though being open to it).

Hey, labeling things, Justin, that is exactly what punk should not be at all. 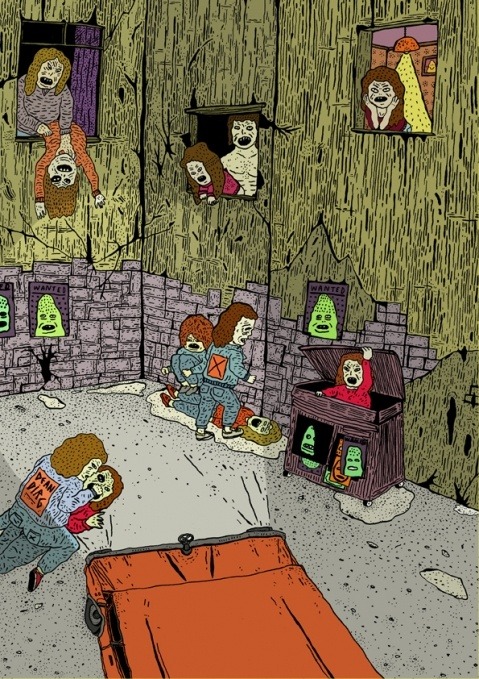 When did you decide to pursue art as a profession? What might you be doing if you weren’t making art?

Back in high school, when I had to decide between arts or medicine. Basically, when I was a kid I had two big passions: drawing and dogs. I used to dream about becoming a veterinarian and save all the abandoned dogs from the streets. At the same time, drawing was always the thing I spent more time doing, right after breathing, eating and sleeping. One day my parents told me an average veterinarian income was not as good as I thought it would be - trying to convince me to become a surgeon instead. That’s when I decided that If I wanted to struggle with money forever I should go artist all the way and give my parents a proper heart attack. Mission accomplished.

After that everything - illustration and writing - happened very naturally. 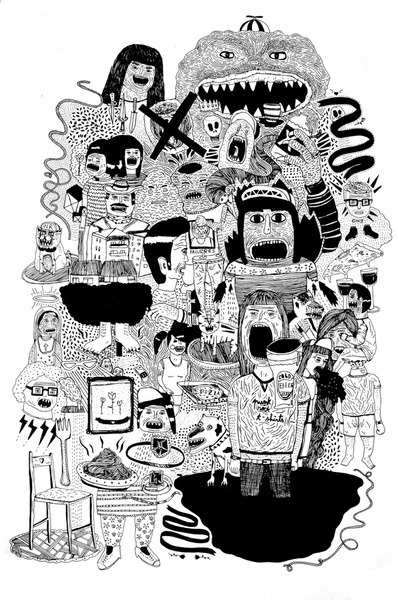 I read somewhere that you had your own record label Not Just Boys’ Fun, tell us about how/why you started it? Clearly you have punk values and perspective, is it possible that you are the incarnation of the 7 Seconds song by the same name, or is that coincidence?

I used to date the boy behind one of the biggest punk record labels in Portugal, and even though I helped him a lot, I always felt that I wanted to do my own thing. Besides that, I was a huge geek on female riot grrrl bands, that’s when I gather some punk bands with female members and started ‘Not Just Boys Fun’ distro and label. It was a good experience to learn two things: 1 - how easily you can lose money in just a few months, 2 - how easily the rest of the world doesn’t give a crap about things one is deeply passionate about.

Every strong, independent girl who does her own thing and doesn’t hide her talent or will behind someone or anything can or is, in fact, an incarnation of this particular 7 Seconds song. So - yes.

Do the Riot grrl tendencies persist in your work and in your day-to-day life?

Yes. It’s like everything your parents teach you while you are growing up. It might be unconsciously, filtered and perhaps modified to your own patterns - but it’s always there, subtly influencing all your moves. What is your relationship with the Internets?

We’re in a open relationship: I love how useful it is for professional purposes and I hate how it easily kills all the most magical affection related things in life. I love how it makes the entire world such a reachable place and I hate how it can easily tear humanity apart.

Sometimes I do “her”, other times I don’t. Overall, definitely one of the most amazing and fascinating things in life. 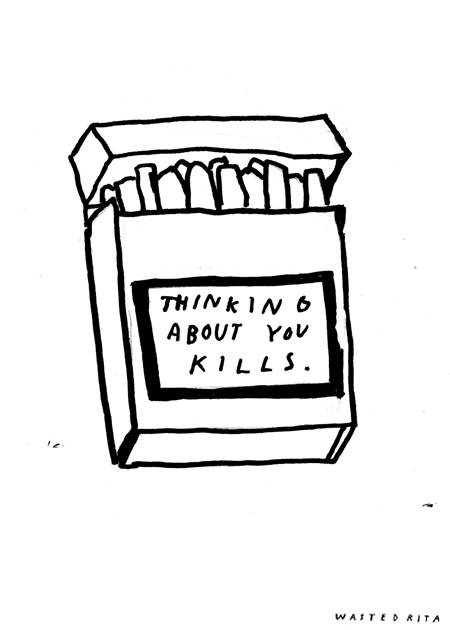 Hey sir, I have a badass cold hearted bitch reputation to maintain…

My true friends say I’m all over my work. What makes my work seem rude and angry is my honest in-your-face factor - that also makes me a not so easy to love person in real life.

What some people refuse to understand is that human beings interpret things influenced by their own personality: if you think I’m a cold hearted bitch it’s probably because you’re a cold hearted jerk. This said, I just realized that you might as well be a sweet fun loving person. Touché. Tell us about the last commercial gig that you turned-down, and why?

Some visual installation for an energy drink brand that gives you wings but no money. Wings are cool but I’m no fool.

Says Wasted Rita is so good, is this your written expression of Fado? Can you hit us with a dose right now?

It can be, even though you seem to know a lot more about Fado than I do.

I discovered the Amália Rodrigues inside of me recently when I moved to Alfama - where fado was born - for one month and felt like I belonged to a place for the first time in years.

All the typic drama, passion, messed up emotional crap, tragic, authenticity, naivety but at the same time roughness of it is identifiable in my statements. Basically they sing and scream their feelings out, usually, in a very corky hysterical over dramatic way; I, on the other side, restrict myself to write it down somewhere. Sandwich sex with both. Keith from behind, Henry performing in front.

You have expanded your range far beyond illustration. Can we expect to see more installation and photography from you, or what’s next?

You can expect me to keep expanding as much as I want to expand and as long as expanding is what I want to do.